The Richmond Society’s Annual Awards for 2018 were presented on Thursday 20th September by the Mayor of the London Borough of Richmond Upon Thames, Councillor Ben Khosa.

Paul Velluet, who founded the awards programme forty years ago, introduced the evening with a review of the more significant winners over the four decades in which they have been presented. 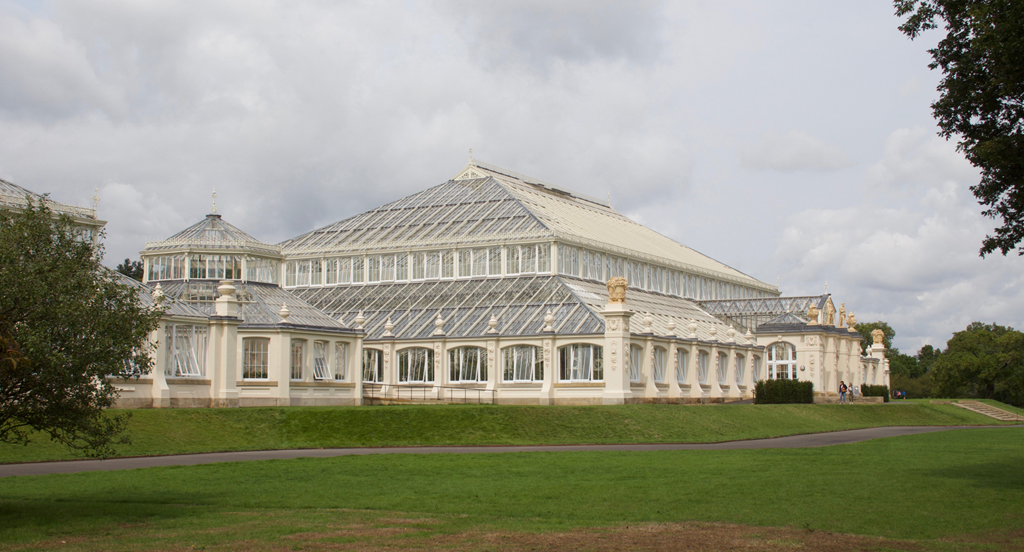 Commendation – Hogarth House, Richmond:
Conversion and restoration from offices to residential use 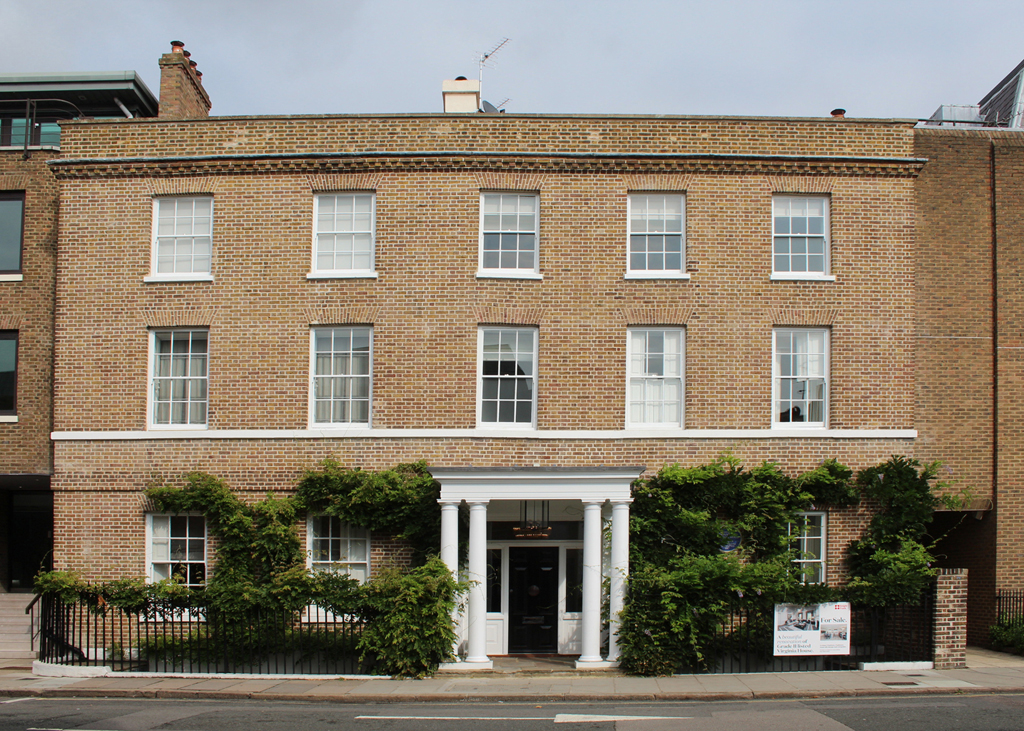 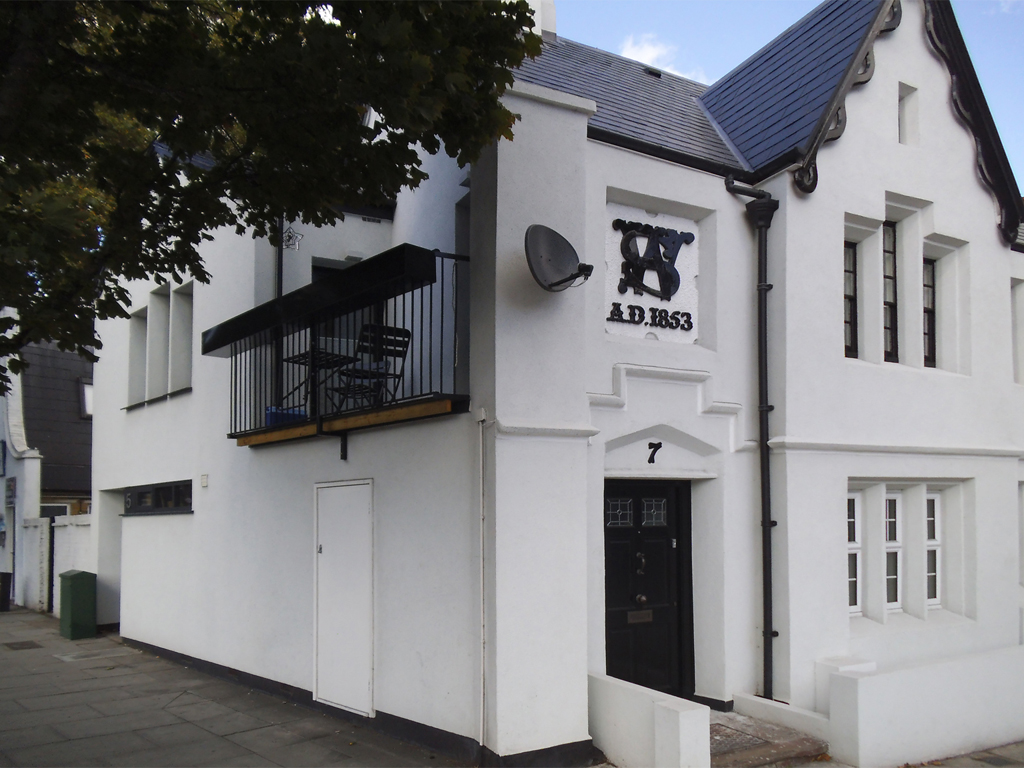 With many thanks to Michael Izett for the photos. Many months down the line and after repeated requests, details are still awaited from the Council of its scheme for the adoption of redundant, former BT, K.6-type telephone kiosks in the Town and potential funding for their repair and restoration.

Some thirty years ago, at the time that BT was proposing the removal of the long-familiar red kiosks from cities, towns and villages across the country and their replacement with inferior models, the Richmond Society was directly involved in securing the listing of four of the then almost forty Giles Gilbert-Scott designed kiosks in the Town and their restoration – such as the two outside The Prince’s Head on The Green.

Years later, the few surviving kiosks are once again threatened – this time with redundancy and disuse.

Whilst the recent successful restoration of the two kiosks on The Green is to be welcomed, the future of others, such as the listed kiosks in The Vineyard and on Richmond Bridge and the unlisted kiosk at the head of Albany Passage near the top of King’s Road, for which the Council rightly but unsuccessfully sought listing remains unclear. The Council’s acquisition of these kiosks from BT is a welcome first step. However, adoption by one of more groups in the local community and their potential conversion for other appropriate purposes, together with their restoration and future maintenance have yet to be pursued.

The Society’s Executive Committee has agreed to support the Council in seeking to persuade Historic England to review its decision to reject the listing of the kiosk outside St Matthias’ Church and looks forward to hearing from members interested in the potential adoption and re-use of this and the listed kiosk in the Vineyard. The Richmond Society has participated in the Old Deer Park Working Group for more than five years.

In December 2017 Richmond Council issued its Draft Supplementary Planning Document for the Old Deer Park.   The consultation on this ended on Monday 22nd January 2018.

The Old Deer Park Working Group’s response can be found here, or by clocking the image to the left.

The original proposals for the Old Deer Park were published by Kim Wilkie on behalf of the Crown Estates in 1999. You can read a copy of this on our website here.

The Richmond Society’s Annual Awards for 2017 were presented on Thursday 21st September by our patron, Baroness van Dedem.  This was the 40th anniversary of the first Richmond Society awards in 1977.

Paul Martin, Chief Executive London Boroughs of Richmond and Wandsworth was the guest of honour.

This year’s brass plaque was given for the renovation and conversion to apartments of the Star and Garter. 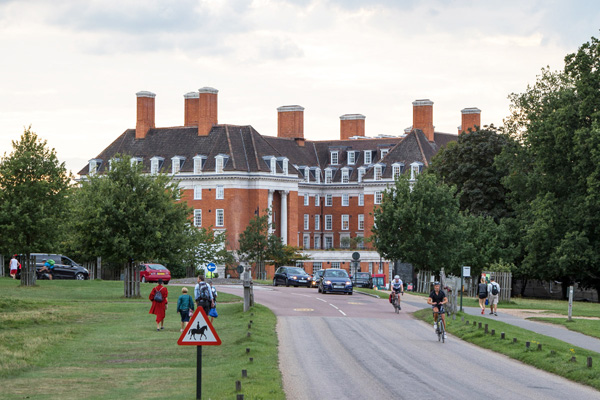 Commendation – The Tap Tavern:
Transformation of the street façades 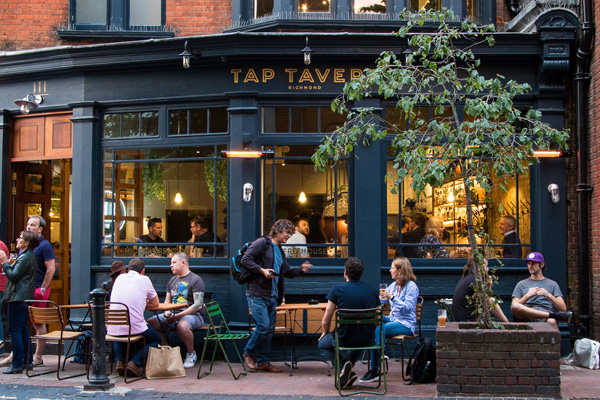 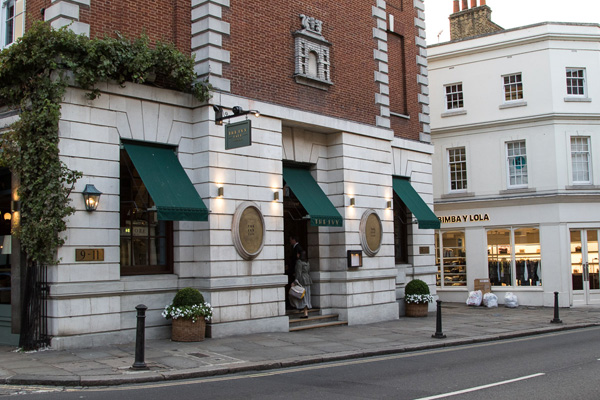 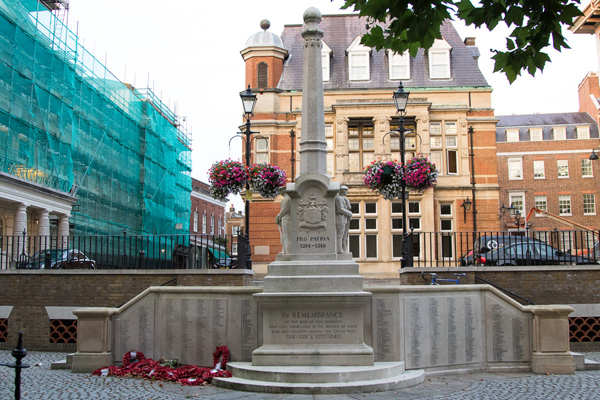 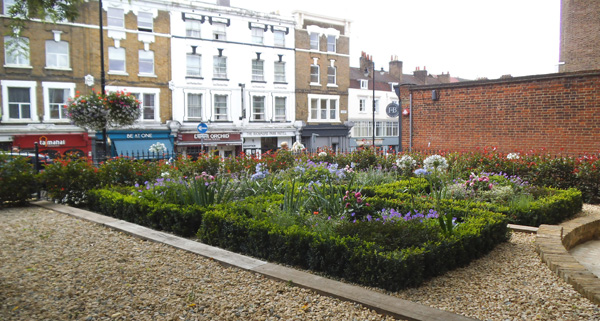 With many thanks to Helen Taylor for the photos. Members of the Society and many others who have lived in and around Richmond since the 1950s and 1960s or longer were much saddened by news of the death of Wendy Macaulay at the end of June.

Wendy made a significant contribution to the Richmond Society across the years – as a founder member of the Society and as member of its Executive Committee from 1957 until 1964, when she stood down to have her fourth child – her place being taken by her friend Sheila Attenborough – and as a valued member and supporter through the years since, including serving as area-representative for Richmond Hill from 1970.

As a resident of Rosemont Road on Richmond Hill for some sixty years, Wendy was a well-known and highly regarded figure in Richmond and an effective campaigner for securing the best for the Town, its community and its amenity. Members of the Society who attended the celebration of the first sixty years of the Society in April will remember with pleasure Wendy’s fascinating recollections of the Town and the Society in its early days.

Perhaps Wendy’s greatest achievement locally was her co-founding The Friends of Richmond Park in 1961 and her active involvement and continuing support for the protection and conservation of the Park ‘for the benefit of public and future generations’. Right up to her recently leaving Rosemont Road and moving to a care-home overlooking her beloved Park, Wendy remained active in local affairs, supporting Liberal causes and the Richmond Good Neighbours scheme, as well as fulfilling her important role as mother of three daughters and one son and grandmother to nine grandchildren.

The Society and the wider Richmond community have much to thank Wendy for in her public service across the years.

In July 2016, Richmond Council issued out its Pre-Publication Consultation on the Local Plan. http://www.richmond.gov.uk/local_plan_pre-publication. In its response, the Old Deer Park Working Group highlighted the absence of a draft Proposals Map, uncertainty whether the Old Deer Park has (or does not have) a Village Plan. It also reiterated the need for the Council to resolve the significant anomalies relating to the definition of the Old Deer Park’s boundaries as highlighted in its Boundary Definitions report of February 2013 (see above).

The Old Deer Park Working Group responded, expressing concern that the Council had failed to address the adjustments that it had highlighted as being necessary in its November 2013 response. This failure went against the clear recognition of the case for adjustments in the definition of the relevant zoning boundaries expressed by the Leader of the Council, Cabinet Members, other Councillors and planning officers at useful and constructive meetings held at York House on the 22nd January and 24th February, 2014. The Group once again urged the Council to effect the necessary adjustments in the definition of the relevant zoning boundaries under the provisions of the Site Allocations Plan.

The Old Deer Park Working Group’s response to this reiterated the principles it had set out in its Boundary Definitions report (see above). The Group’s principal concern was that failure by the Council to remedy the designation anomalies that it had identified would leave the relevant areas of the Old Deer Park at significant risk of proposals for substantial built development damaging the integrity and distinctive character of the Park.

The Group’s 2012 report raised concerns regarding significant anomalies regarding the definitions of a number of boundaries relating to the Old Deer Park shown in the Council’s Local Development Framework Proposals Map, Adopted November 2011. So in February 2013 the Group issued a further Boundary Definitions report recommending that the scope of future Old Deer Park plans include:
(1) the Pools on the Park, its grounds and car park
(2) the Old Deer Park car park and the land between that and the railway
(3) the carriageway and footways of the Twickenham Road.

In June 2012 the Group published the report: The Old Deer Park, Richmond – Re-connecting the Town to its local park – Realising an under-recognised parkland asset – A framework for conservation and enhancement.
The Group’s aim in publishing the report was to provide a positive contribution to discussion and debate in the context of the falling-in and renewal of all but two of the existing leases granted by the Crown Estate for the land comprising the Old Deer Park, Richmond.

The original proposals for the Old Deer Park were published by Kim Wilkie on behalf of the Crown Estates in 1999:
The Old Deer Park, Richmond – Re-connecting the Town to its local park – Realising an under-recognised parkland asset – A framework for conservation and enhancement.

The Richmond Society’s Annual Awards for 2016 were presented on Thursday 22nd September by our new patron, Baroness van Dedem, with Richmond’s Mayor, Councillor David Linnette, as the guest of honour.

This year’s brass plaque was given for the restoration of the Collcutt fountain at the top of Richmond Hill by the entrance to Richmond Park. 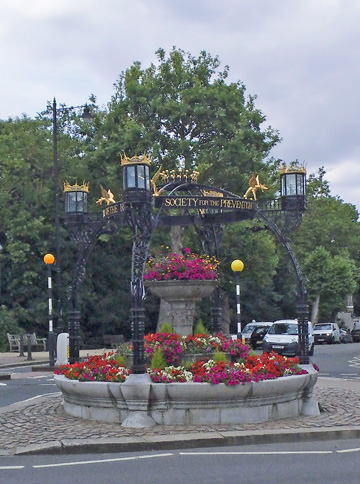 Awards were also given for the restoration of Dunstable House and of the Clerestory Windows in the Parish Church. 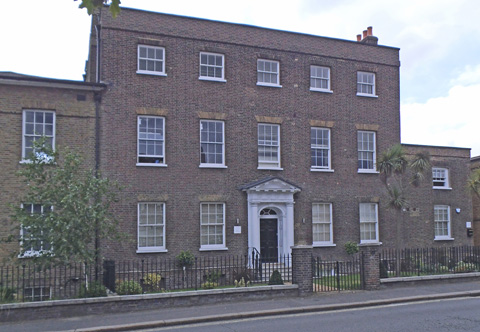 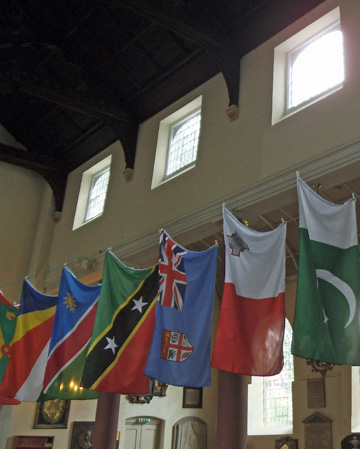 The RSPA fountain by the Star and Garter in Richmond

The Collcutt Cattle Fountain is a fine example of Arts and Crafts design and Victorian metalwork, Listed Grade II, and is one of only a few remaining intact examples of the work of the notable Victorian architect T.E.Collcutt, another being the tower of the Imperial Institute in South Kensington.

The Cattle Fountain was commissioned to commemorate the work of the local branch of the RSPCA.   A design was published in Building News in 1891 for a decorative fountain and drinking trough for cattle & horses that had toiled to the top of Richmond Hill. Collcutt even included a drinking trough for dogs, at ground level.

Recently we realised that the monument required major repair. The Richmond Society obtained estimates for the necessary repair work and raised funds towards the costs of repair, with work being overseen by LBRuT’s consulting architect, John Dangerfield of Donald Insall Associates.

The decorative metalwork canopy was removed to a conservation workshop so that essential repairs to the structural elements and finishes could be carried out.  The lanterns were fully restored, and rewired using eco-friendly LED lamps. In addition masonry repairs and re-pointing were carried out on site to the granite trough.