Gaucho, which operates a restaurant with an outdoor area on the towpath near Richmond Bridge and the Richmond Hill conservation area, applied for planning permission to operate a seasonal restaurant on part of Richmond Landing Stage. The application envisaged Jumbrellas, an outdoor cinema and take-away service. The application was opposed by The Richmond Society and River Thames Society as well as several nearby residents, and Richmond Council’s Planning Committee rejected it in robust terms.

At the same time Gaucho applied for a licence to sell alcohol from the Landing Stage not only to diners there but also as a take-away. We opposed that too. Richmond Council’s Licensing Committee considered that there were no grounds to justify refusing the application and granted a licence (which excluded operating an outdoor cinema on the Landing Stage). Although this seems perverse, the Council’s Planning and Licensing committees operate under different statutory regimes.

You might therefore have been surprised to see that Gaucho is operating a restaurant on the Landing Stage. It is relying on the Government’s extension to permitted development rights which temporarily allows restaurants to operate for 56 days in circumstances which would otherwise require planning permission. As Gaucho now has a licence to sell alcohol on and from the Landing Stage it can operate its extended restaurant for 56 days even though it was refused planning permission.

Neighbours who opposed the planning application were concerned about additional noise and disturbance. In addition to these reasons The Richmond Society opposed it because of the encroachment on Metropolitan Open Land, the river and use of the river and increased congestion on an already crowded towpath with adverse effects which may result from greater light pollution. 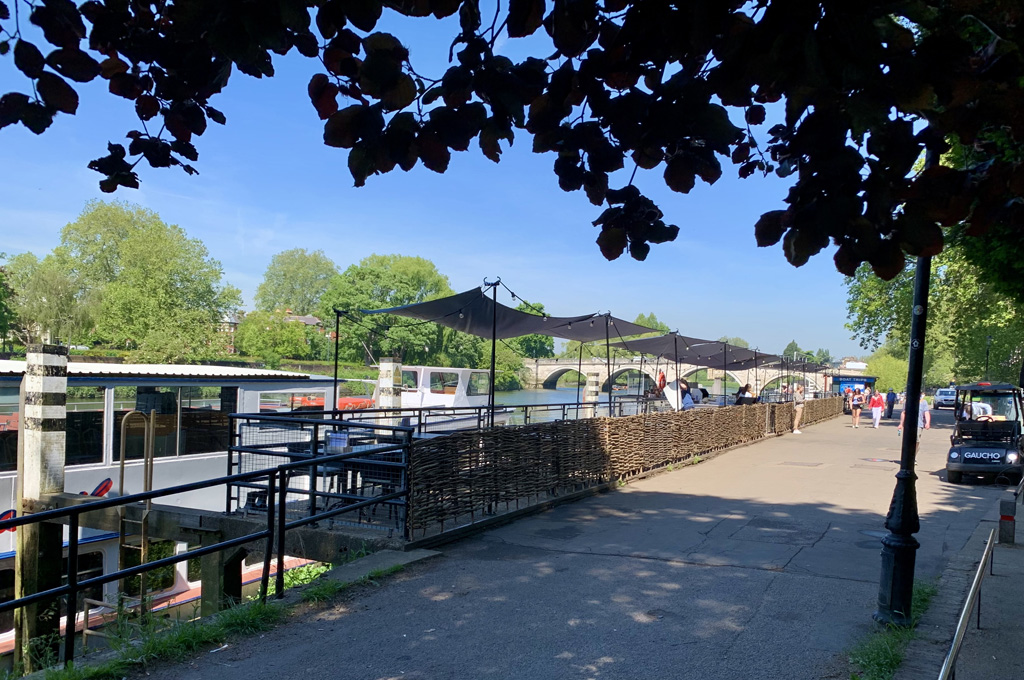 For many years we have opposed extending commercial operations on the towpath, particularly that part of it which is upstream or south of Richmond Bridge. The rural and special setting must be protected, and creeping commercial encroachment will ultimately destroy that which residents and visitors alike come to enjoy. The photograph shows how the new operation on the Landing Stage impedes the view towards Richmond Bridge. The blue covers are instead of the Jumbrellas referred to in the planning application which would have been even more intrusive.

We understand that COVID has taken a significant financial toll on local businesses and that relaxing the regulations is intended to boost the hospitality sector of the economy. However this must be balanced against the detrimental effect on the local environment.